Pooling resources across villages and communities to improve efficiency and achieve better results has long been a feature of Pacific life. Today, that tradition is being employed across a wide range of activities to develop policy in a way that resonates with Pacific people across the region. The approach has proven extremely effective for the development of the Pacific Regional Education Framework (PacREF).

An excellent example of traditional communal practices can be seen with local community fishing practices, where different coastal villages collaborate to prepare, fish and then share their gains according to an agreed system of distribution. It is known by Tokelauans as inati, by Samoans as lau, and by Fiji’s itaukei as yavirau. Preparation takes about two days to collect the coconut palms or forest vines that are used to create a barrier or wall. The villagers hold this wall in the waters to form a semi-circle and then slowly converge to trap the fish. They move in slowly as they beat the water surface to force the fish into the fishing nets that have been set up beforehand. Such communal practices result in a surplus catch for all involved as well as strengthened relational ties.

This traditional practice has been offered as an analogy for the PacREF 2018-2030. The policy framework offers a regional roadmap for the education systems of 15 island nations and their development partners, to pool resources and work to raise learning and teaching quality for everyone. The approach has proven popular with six Pacific island nations contributing their entire education grants from the Global Partnership on Education (GPE) for the PacREF implementation programme. Exhaustive preparation processes and design workshops with all seven of the PacREF’s implementing agencies ensured clear work plans, budgets and timelines were in place. The effort was coordinated by SPC’s Educational Quality and Assessment Programme (EQAP) in close collaboration with the PacREF Facilitating Unit (PFU).

“The processes needed a great deal of consultation, which required similar elements to the yavirau, with committed partners, real collaboration, openness and the recognition of everyone’s unique strengths to really pull together to progress the submission,” said Mr Waqabaca, the PacREF Implementation Adviser with EQAP. Due to the COVID-19 restrictions, 16 virtual consultation workshops were held before the final documents were submitted to GPE.

The effort to secure this unique funding arrangement was commended by the Pacific Islands Forum Secretariat’s (PIFS) outgoing Secretary-General, Dame Meg Taylor, during her opening address at the 12th Forum Education Ministers’ meeting (FEdMM) in mid-April. She emphasised that the PacREF is “the key to shaping and driving quality education in the region,” and she called on the education ministers to allocate more funds to the PacREF.

“We need to see a significant increase in our investment in education,” she said. “Indeed, this is not an investment for our current generation, but an investment in our very future. The answer to our human resource and capacity constraints in our region is long-term investment in our education system”. She reminded leaders that the region’s prosperity was dependent on the capacity of its people. “Our investment in our people, in particular in their capacity, will guide how we navigate the challenges ahead and seize the opportunities that become available, to progress and sustain ourselves into the future”. 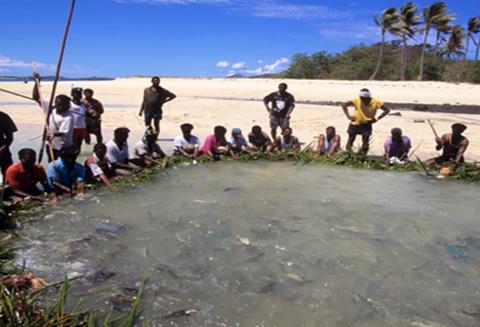 A detailed report on the framework’s development and the first phase of its implementation programme was presented at the FEdMM meeting, which was coordinated by PFU and assisted by SPC (EQAP), the University of the South Pacific and PIFS. SPC and USP are two of the seven PacREF implementing agencies.

The education ministers were also briefed on PacREF’s implementation strategies. PFU coordinator Filipe Jitoko said the framework was designed to allow ministers full engagement through their oversight role. This oversight function is shared with PFU, which also serves as the PacREF secretariat, the CROP Human Resources Development Working Group, the Pacific Heads of Education Systems (PHES), and the five-member PHES Steering Committee on the PacREF.

The importance of quality data on the progress and impact of the PacREF programmes was underlined during the meeting. Mr Jitoko said an improved mechanism was being pursued by EQAP, which is also tasked with the monitoring and evaluation of the implementation programme.

This ministerial meeting marked the transition from the use of FEdMM, which was first convened by PIFS in 2001, to the adoption of the new name, Conference of the Pacific Education Ministers (CPEM) meeting.